As a local, well who really is a local, I am privileged to have other locals unlock many doors for me. And so it was when last year about this time a gentleman showed me his private stash. He said to me "Do you want to see my favorites?" When I said I would he excitedly lead me to a place, he opened the door and before me were several empty bird nests. I asked him where the chicks were and he said they had already hatched and flown away.
This was the local waterfront treasure "Herring seagulls !!!" 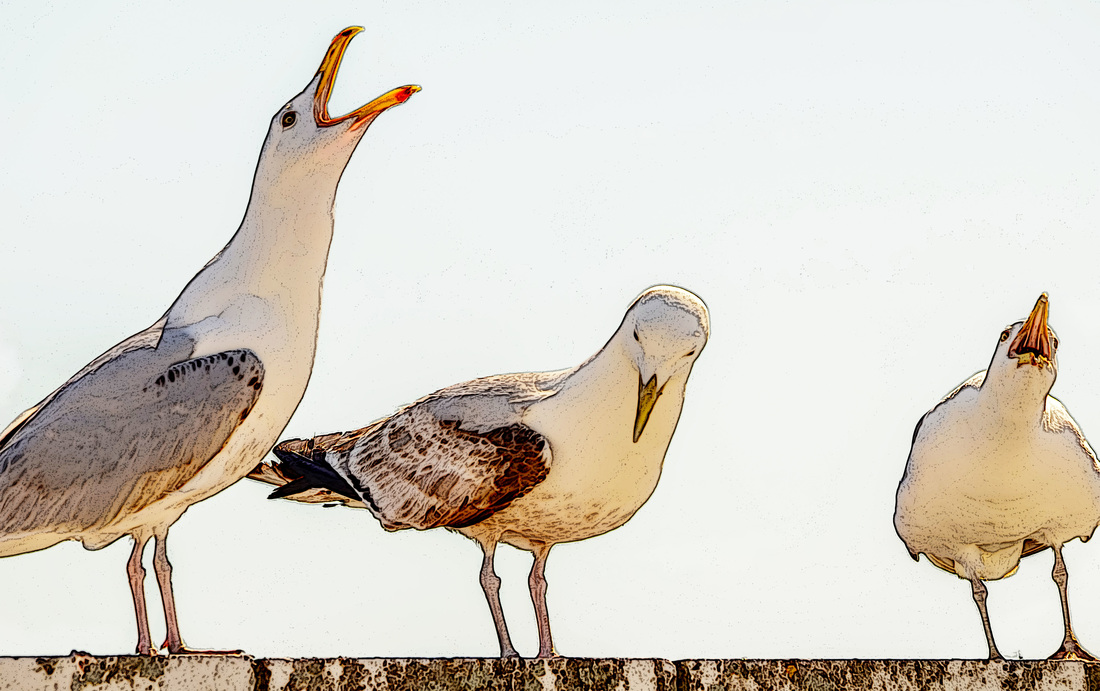 I made sure I paid close attention to all that he told me. I kept his information close in anticipation to now, a year later. I watched that fall as the gulls roosted and flew. Throughout the winter I continued to observe them, their habits, their demeanor, and where they gathered to stay warm on cold winter nights. After all I am a "local" originally from away, but ever present in my beloved city. 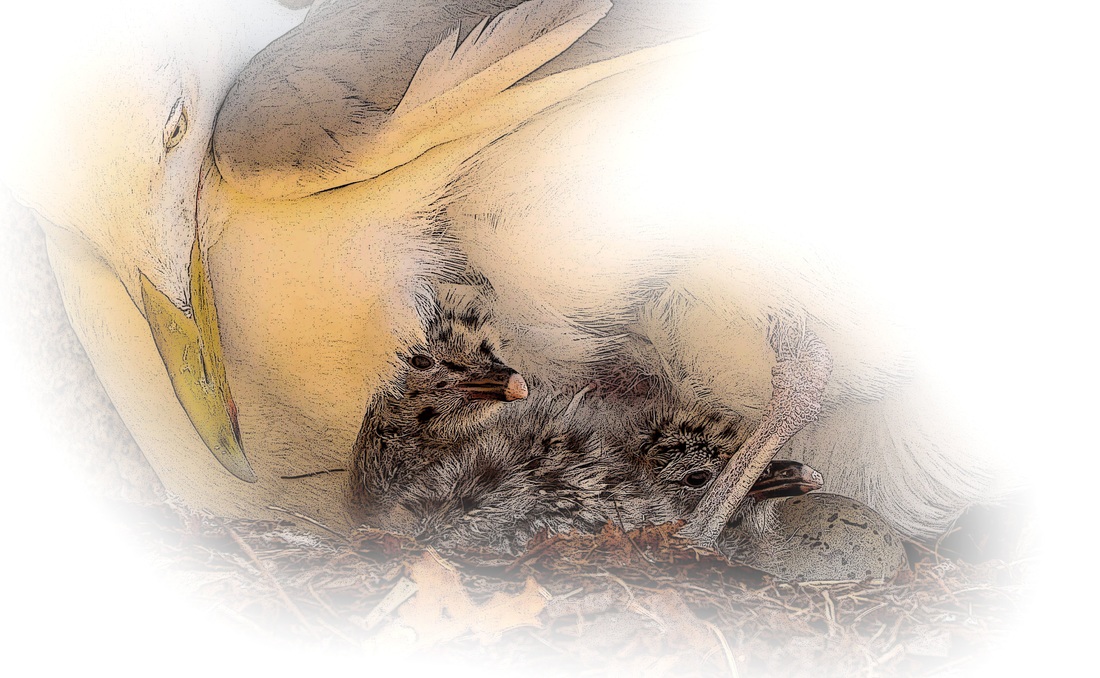 When the time came for the seagulls to nest this year I began a semi vigil. I met people, "locals", who could  point me in the right direction. I started sitting for hours and establishing a relationship with these sky rats, what an awful imagine for such a wonderful creature! I started feeding them and learning about their nesting behavior.
I also fell in love ! To know them, the gulls, is to love them... 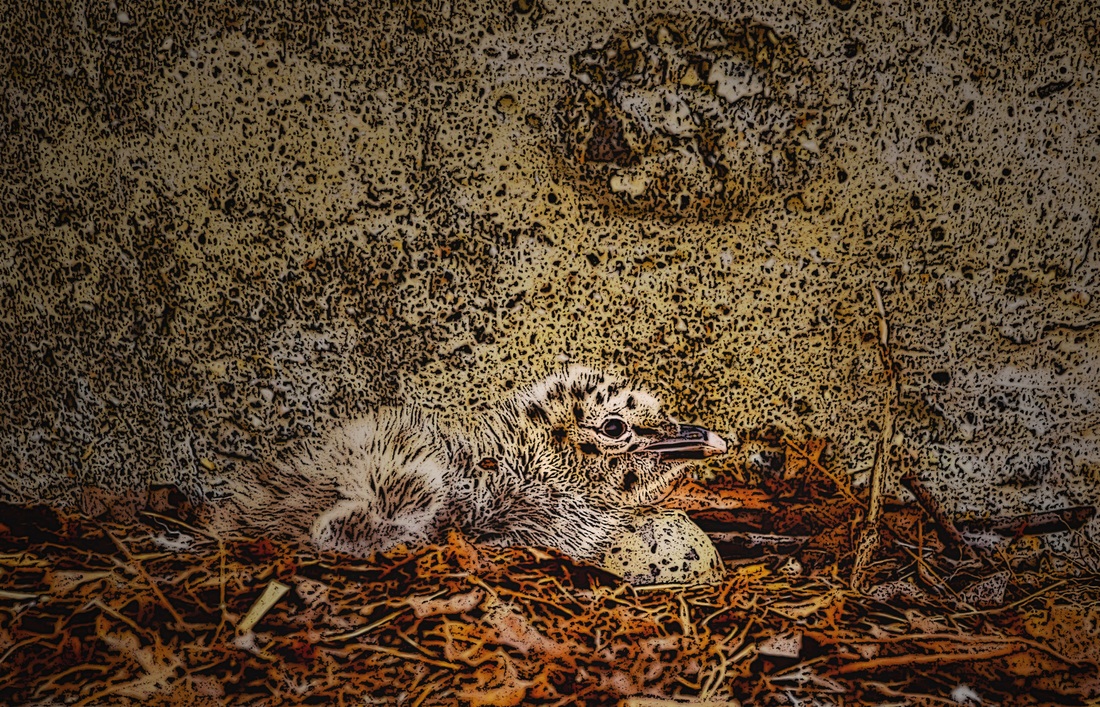 I find myself laughing often as I sit and watch the chick gulls. They are just so darn cute ! They communicate in soft peeps. They run towards one another in what looks like a near missed hug, as though they are just seeing the other ones for the very first time. They don't fight or scrabble over food but rather there is an almost politeness as they share their parents meals. Since they've hatched I've been close to them physically. I am able to see in their tiny eyes and they are filled with innocence. They twinkle in a way that genuinely warms my own heart with joy.
I think to myself that in this bird I have a glimpse at what Gods spectacular creation and goodness must have been in the existence of Eden before the fall of man. I am reminded of the words in Genesis "And God saw that it was good." 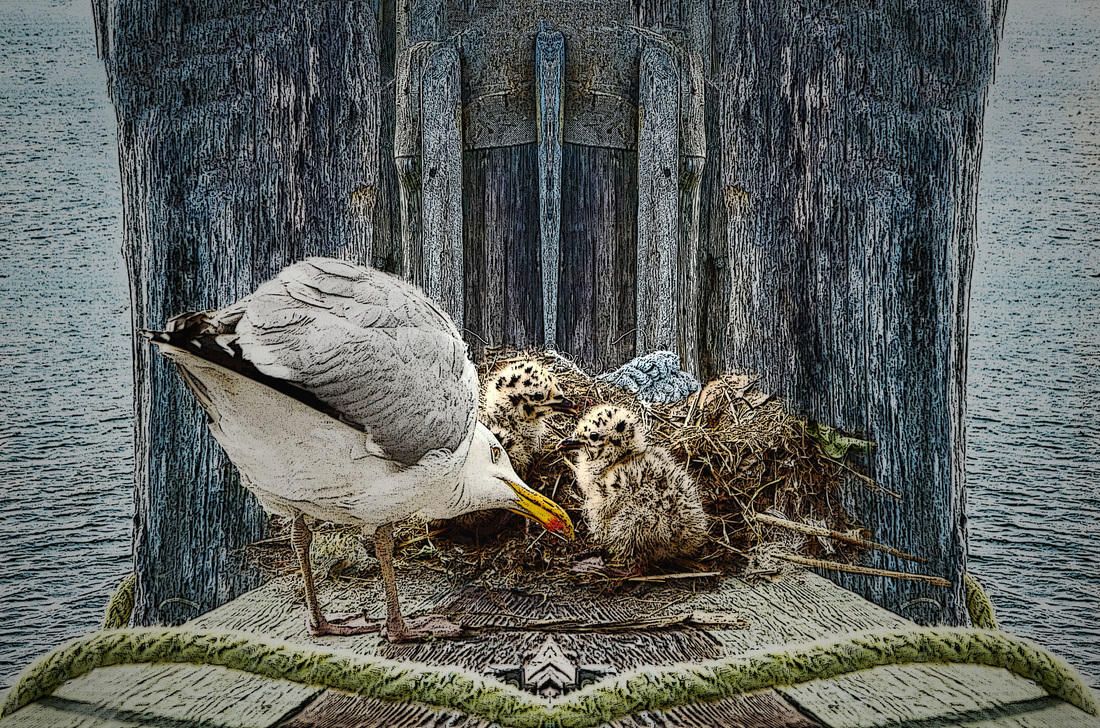 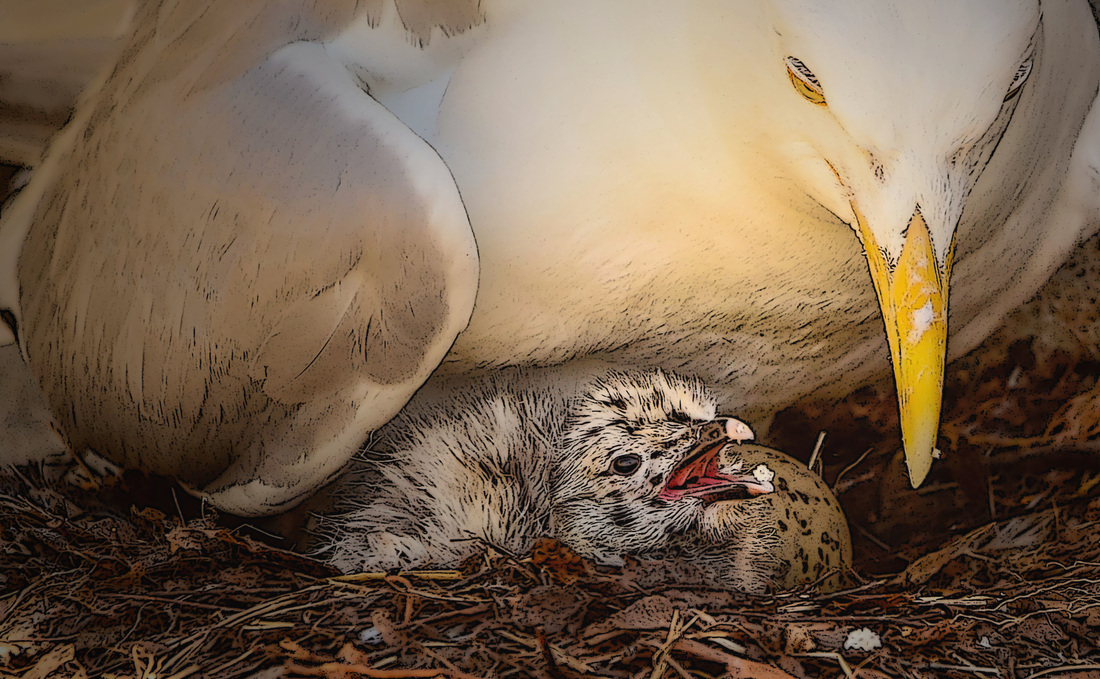 Herring_seagulls.jpg, Seagulls.jpg
Not since Jonathan Livingston Seagull has anyone adored seagulls as much as me. I say that tongue and cheek because I know better. I know that Pam and Kirsten and many others feel the same way.
Well over 40 years ago I was introduced to The Seagull and Neil Diamonds music through Jonathan Livingston Seagull. I was 15 years old. It was a very dark time in my own young life. Even now I can remember how much comfort I got from Diamonds album, the cover of that album, a perfect imagine of peace and the sensitivity I experience when out photographing.
Jonathan Livingston Seagull tapped into deep emotions in my soul. The music and Diamonds words came close to truth but not complete in The Truth. Yet today it still brings tears to my eyes when I consider God's grace in my life. How He loved me, a rag doll mess for years, and how His mighty hand extended from heaven to offer me real peace, the peace that passes through all understanding through His son, Christ Jesus.
Emotions are intangible and best understood by the Creator alone. I love seagulls and I am forever thankful to the creator Lord God for creating such a dear creature.
"Glory day, glory day, glory looking day...and we wait"
Neil Diamond 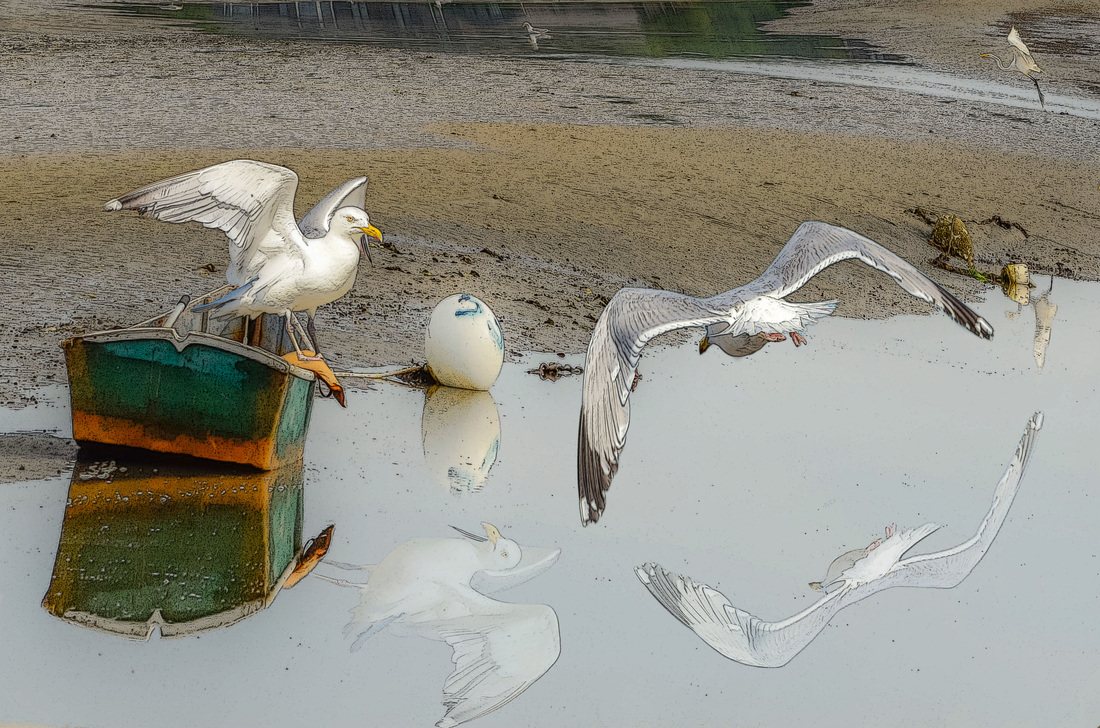 A community effort... Those of us watching and protecting the seagulls must realize, as I do, that these are the most spoiled birds on the entire east coast !!! We write notes to one another, leave water and food for the nature family, and have a fierce loyalty to the gulls. As the full season of tourism gears up we grow nervous and worried, desiring for flight school to begin. Rest assured, some of the chicks are moving along, but others are not ready.  My own anxiety is high, I have restless nights and crazy nightmares OVER SEAGULLS !!! Here are a few pictures of what I've dubbed "the children's pool." Those of you who have been contributing to this need to see the FUN that your chicks are having. 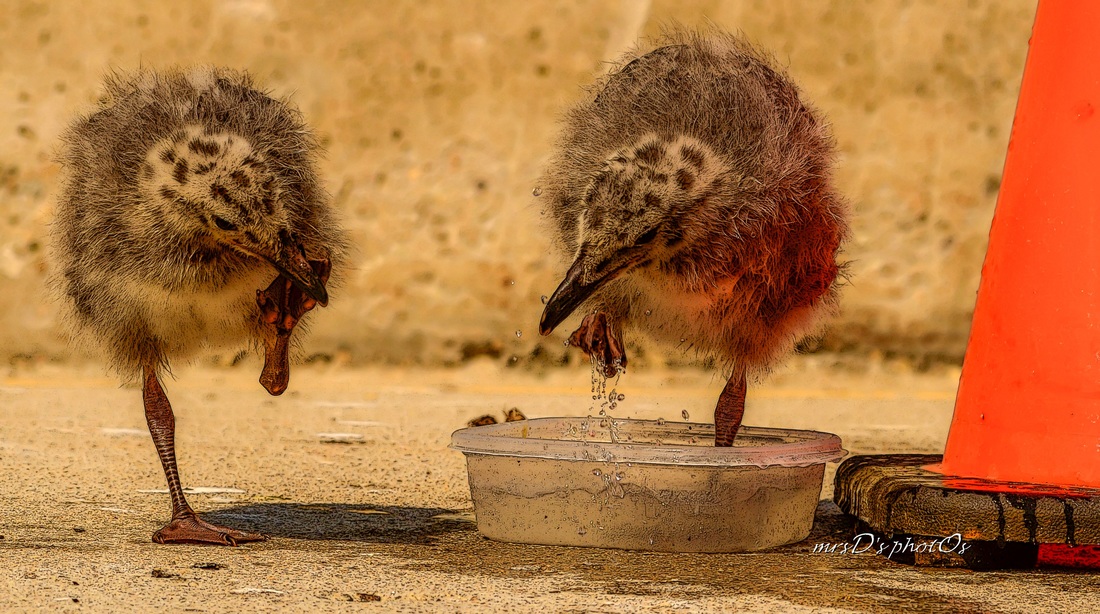 I stood watching one evening as a few adult seagulls flew out from the ocean. They landed and flapped their wings after their cool swim/dive. I noticed that the detail of these wet gulls, along with the evening light, made photographing them easy. I took a bunch of pictures and then created a chaotic collage from them. 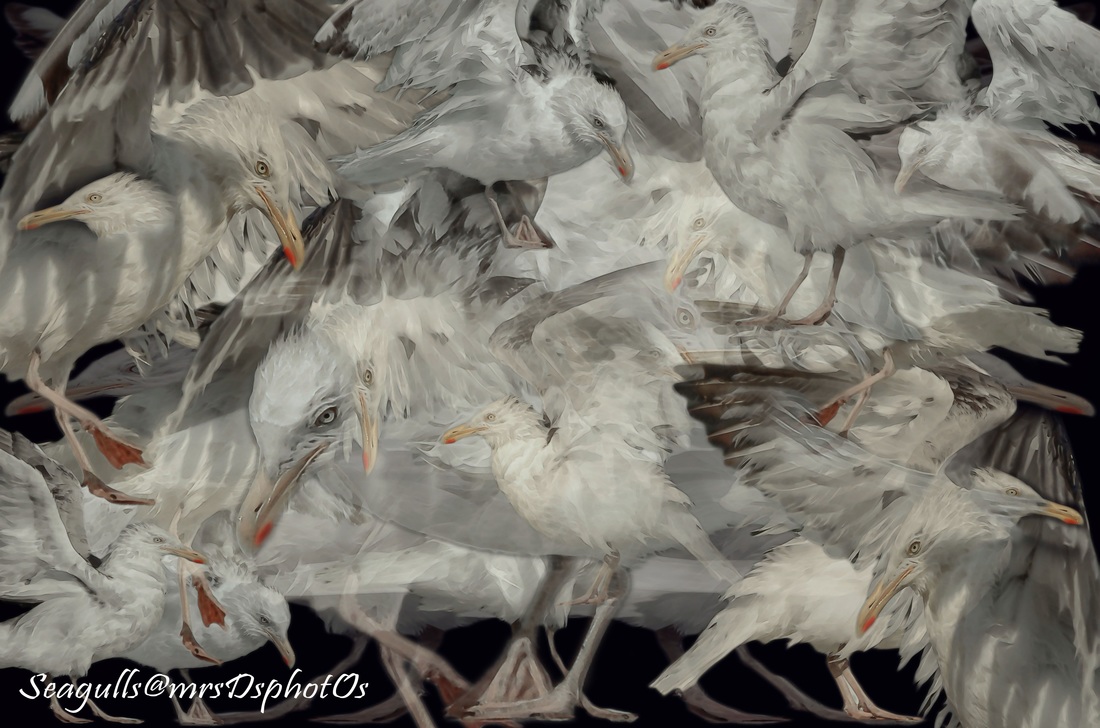