The bald eagle became our national bird symbol in 1782. As a majestic and native species, the eagle was chosen over the turkey that Ben Franklin had lobbied for. In the late 1800's there were approximately 100,000
​nesting bald eagles.
The bald eagle became an "endangered or threatened species" in 1972 when there were only about 400 breeding pairs in the US. They were removed from the list after a successful recovery, in 2007.
​According to Reference.com there are about 70,000 bald eagles alive today. Half of that population is in Alaska. 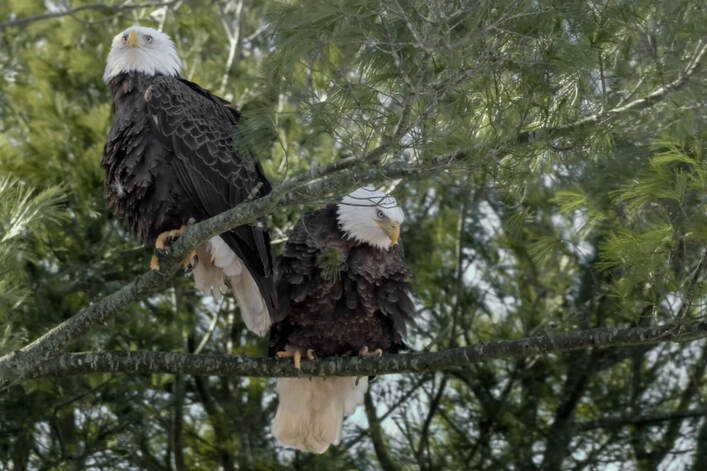 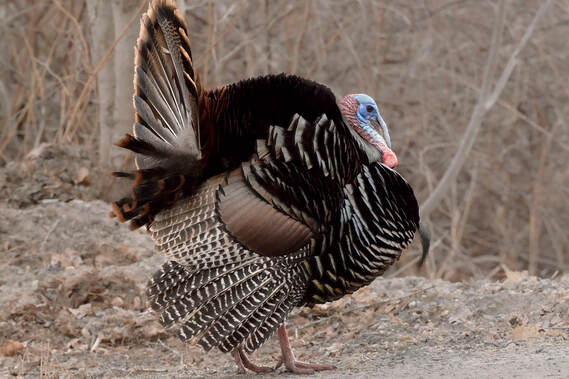 In 1972 there were an estimated 29 eagles nests in Maine. Today, in 2020, there are upwards to 800 nesting pairs.
A few years ago while I was out searching for bald eagles someone told me a story. People are always telling me stories. They told me about a man who had set up eagle feeding stations years back. In May, 2018, Down East Magazine did an article about him. His name is Frank Gramlich. He and his side kick Charlie Todd, who was in charge of the non-game program at Maine Department of Wildlife and Fisheries, did a lot to increase eagle numbers in our state. According to the magazine, this was done to boost juvenile eagle survival rate which helped to secure the bald eagle population growth. They additionally “banded” the raptures in order to keep track of them. Last year I found a bald eagle with a GPS type of attachment on its chest. Initially it made me a bit uncomfortable but it is sort of cool that biologists are able to follow eagles everywhere in “real time.”
In the photograph below there is a GPS wire showing in the middle of this male bald eagles shoulder. 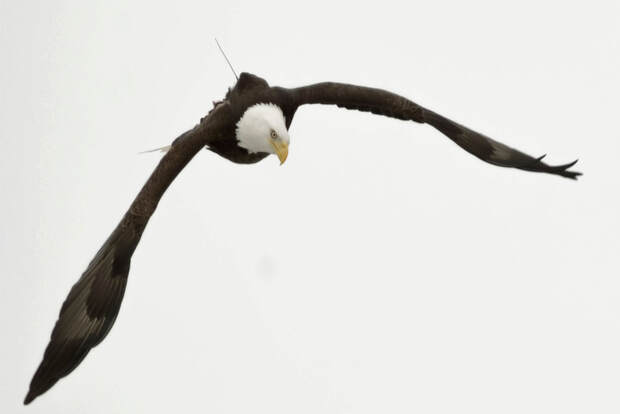 The Road less Traveled...
Two juvenile bald eagles hanging near their chosen perches. Young eagles spend much of their time learning and practicing their much needed hunting skills. After they permanently leave their nest, at about 6 months of age, their parents rarely feed them.

The photograph below, taken at some distance away, shows a yearly #eagle submitted to one of its parents. I say a yearling but it was likely born last April. This juvenile eagle is pretty much so on its own. Its parents are getting ready to lay new eggs. Once a young one is totally out of its nest and a new mating season arrives they are not welcome back to the nest again. Parents still spend time with juvenile off-spring but their main focus turns towards new eaglets to be born in April.
#mrsDsphotOs A yearling is still mostly brown, to include their eyes. They are often mistaken for golden eagles which rarely come to Maine. The golden eagle is huge in comparison. 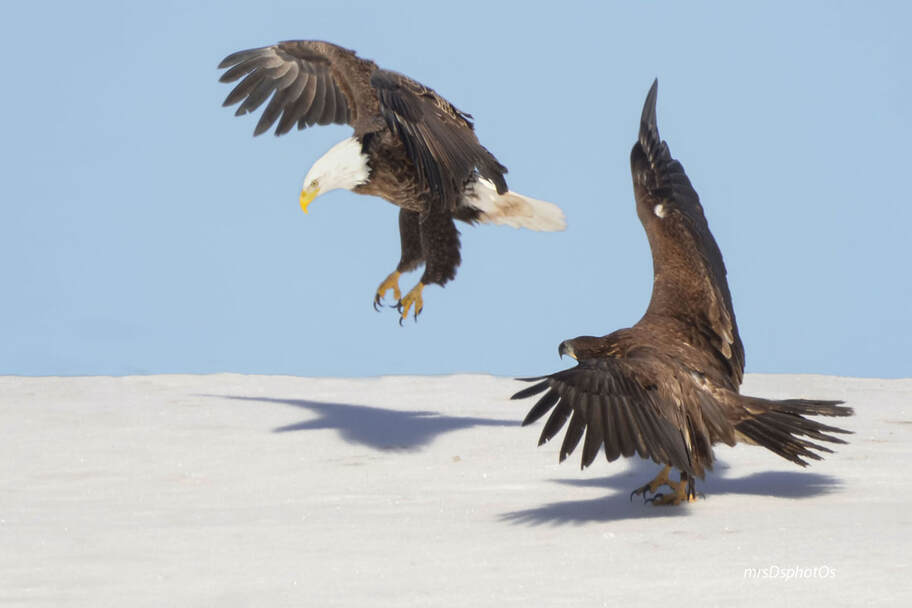 Those wonderful talons ! While an #eagle uses its talons for hunting and defending itself a bald eagle parent will ball them up when attending to their young eaglets in a nest. That's right ! An eagle curls their talons and walks on the balls of their feet to keep from harming their babies. #baldeagle #mrsdsphotos #bornintheUSA 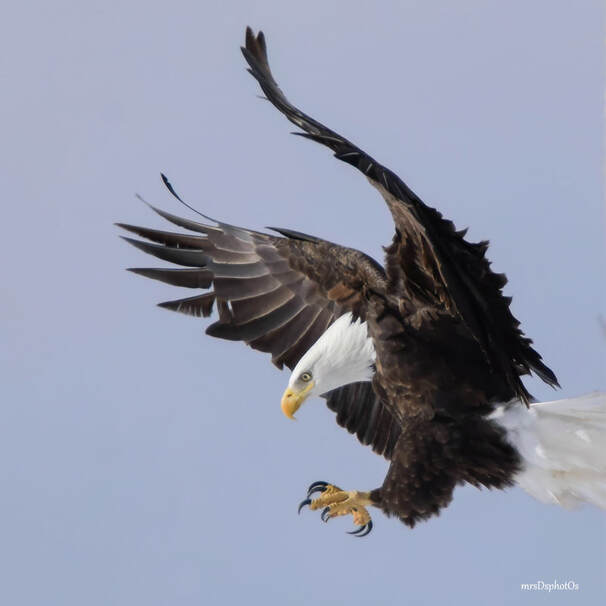 The difference between a male and a female bald eagle is often tricky for a lay-person to figure out. Once, while on a frozen river with some guys and gals who were ice fishing and standing around talking, an eagle pair came flying toward us. A man pointed at the sky and said “She’s really big and pretty.”
She sure was! Males and females have the same plumage but a female bald #eagle is about one third larger than the size of a male.
In studying them, one instinctively begins to easily see this sizing difference even at a distance. I have found that most often when I find bald eagles in a tree together the female is perched on the highest part of a branch while her mate is on a lower branch. If they are on the same branch it is apparent to see that she is bigger.
She often has a sterner more serious looking face. Her beak is larger, with her bill deeper and further pronounced in length, stopping just past and under her eye. The male’s depth ends under the middle of his eyes. 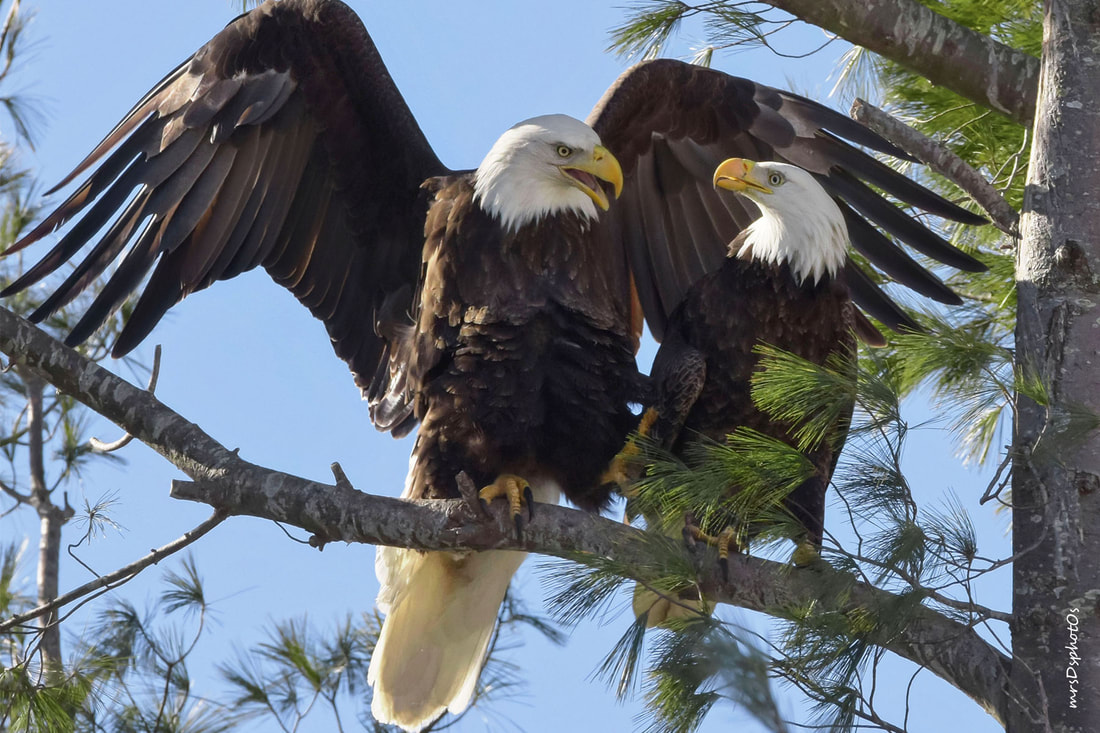 What is a juvenile eagle? Eagles reach maturity at around 5 years old.
Several times in my adventures fishermen and others have shown me their smart phone pictures of their “golden eagle.” I have to inform them that what they saw was an immature/juvenile bald eagle. Young eagles have more brown covering them which lead people to think it’s a highly prized and rare ( in Maine ) golden eagle.
The more white plumage that we see the older the eagle.
When eaglets start to fledge they are almost entirely brown. As they mature they begin to be marked by more and more white spots.
In the photographs below the first one is of a yearly or almost yearly as it likely hatched last April.
The next two photographs are of juvenile eagles varying from 1 1/2-3 years old, while the last picture is one of a 3-4 year old bald eagle.
In their forth year they have more and more white filling out their crown and tail until they are in full adult plumage 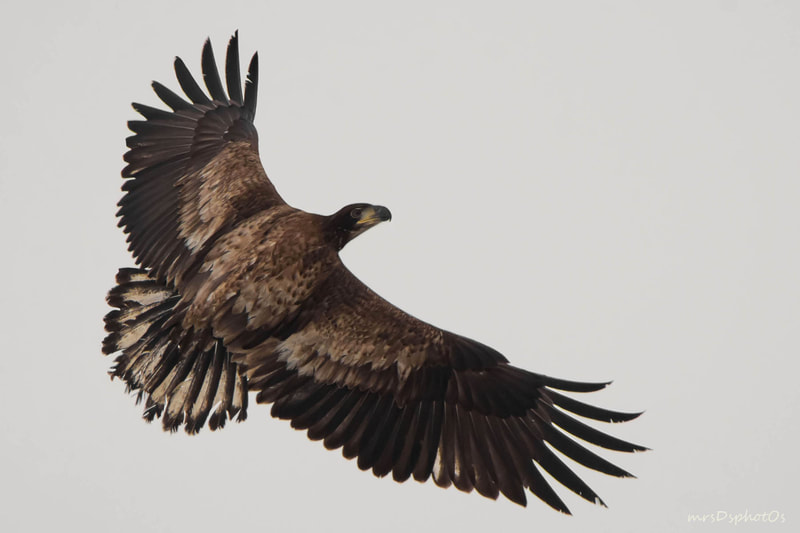 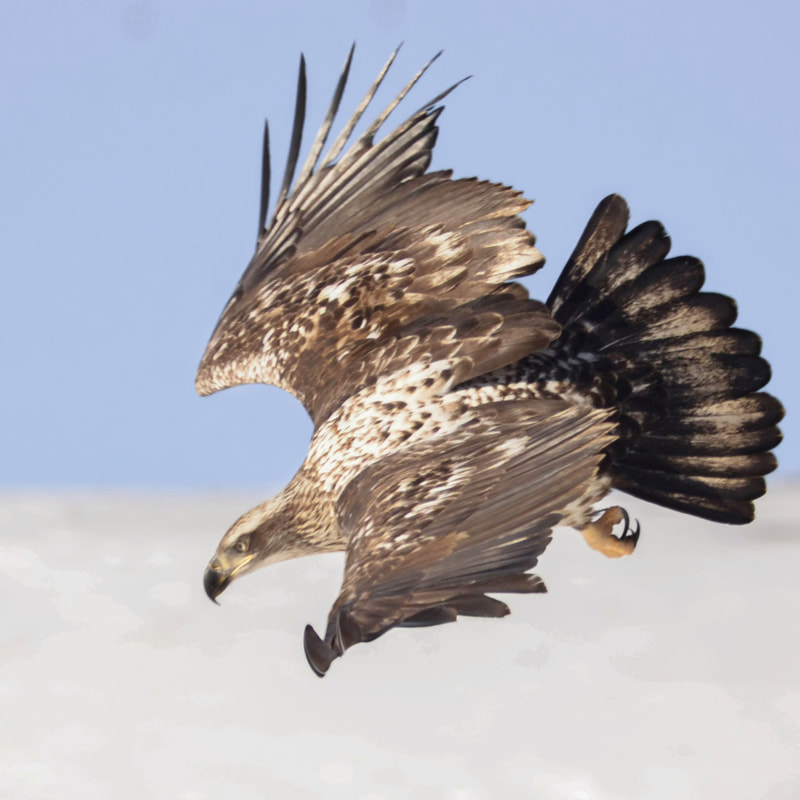 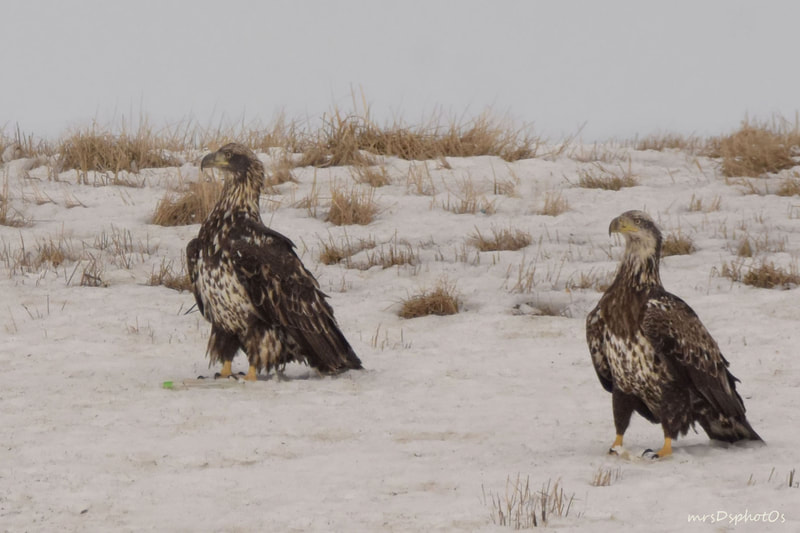 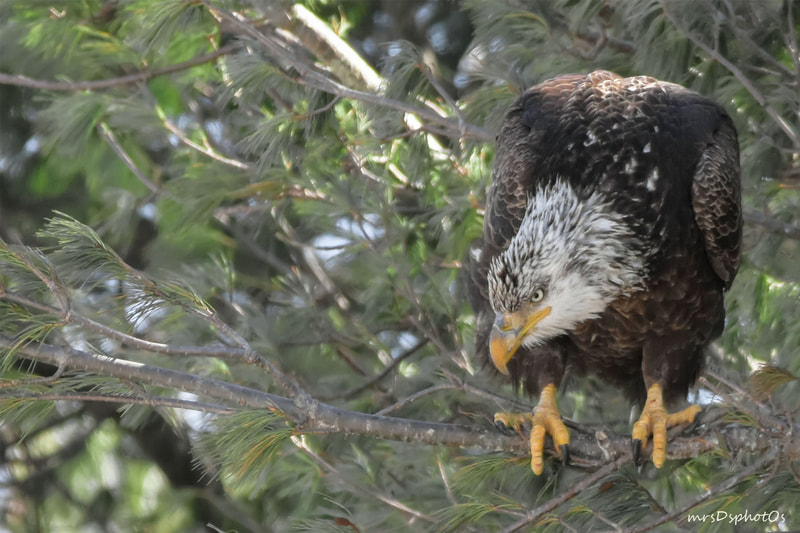